Situated on the banks of the river Sabarmati, Ahmedabad is a city with malls and multiplexes on one side and museums and monuments of historical significance on the other side of the river. An interesting mix of the old and new, a rich reservoir of historic architectural marvels, Ahmedabad is the largest city of Gujarat. Ahmedabad’s pol culture is world renowned and many foreign tourists visit Ahmedabad each year just to have the look and feel of the heritage of this beautiful city. Ahmedabad’s Bus Rapid Transit System (BRTS) is the most successful initiative of its kind in India. Ahmedabad is now flooded with malls, multiplexes, premiere institutes and all forms of development.

Sabarmati Riverfront : An innovative project,  the Sabarmati Riverfront undertaken by the Ahmedabad Municipal Corporation consists of a magnificent walkway over the river Sabarmati. Gardens, esplanades, amusement parks, golf courses, water sports Park and slum rehabilitation are part of this project. The entire riverfront offers a panoramic view of the city’s landscape.

Kankaria Lake : Constructed in 1451 by Sultan Qutb-ud-Din, the Kankaria Lake has been designed to be one of the amusement areas of Ahmedabad. Featuring a zoo, a natural history museum, Bal Vatika (children’s garden) along with eating joints, the lake is a major attraction spending an evening. 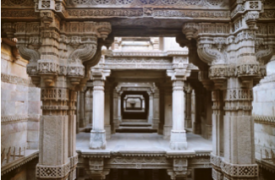 Adalaj Vav : The Adalaj Ni Vav is situated 18 km. north of Ahmedabad and is a popular tourist place. This place is a must for any visitor who enjoys exploring the history and appreciates great architecture.

Jama Masjid : One of the most resplendent mosques of India located in the city. Built with yellow sandstones, the architecture of this mosque is a blend of Hindu and Muslim styling.

Sidi Saiyad Mosque : Built  by  Sidi  Saiyed  in  1573,  this  elegant  mosque is  famous  all  over  the  country  for  its  fantastic architecture  and  exquisite  Jali  work  or  stone  tracery.   A  vivid  example  of  Indo-Saracenic  architecture,  the  stone  has been carefully carved in order to create the filigree effect.

Calico Museum : The  premier textile museum of the  country , known  for  its  distinguished  and  comprehensive  collection  of  textiles  and  artifacts its  outstanding  collection  of  Indian  fabrics  exemplifies  handicraft,  textiles  spanning five centuries  and  attracts large numbers  of visitors  from the  general public, as well as  increasing numbers  of Indian  and  international  research  scholars.  Timings:  10.00 am to 12.30 am; 2.30 pm to 4.30 pm.

Akshardham Temple : Dedicated  to Lord Swaminarayn & inspired by HDH Pramukh Swami Maharaj, Akshardham Temple  is  a  miracle  worked  in  traditional  stone  architecture  & ancient  wisdom. A  majestic  temple,  it is a tribute to the artistry  of the man and his faith in  God. A major attraction of the temple is  the Sat-Chit-Anand Water Show (first of its  kind in  India) a spectacular show on water using effects of fire, sound talk, water & video showcasing the cultural heritage on a 60 feet wide water screen. Temple Timings:  9.30 am to 7.30 pm.  (Monday closed)

Science City : Science  City  is  an  initiative  of  the  Government  of  Gujarat  to  trigger  an enquiry  into science  with the  aid of entertainment  and experiment.  The 3D IMAX  Theatre, Musical Fountain, Energy  Park  and  Simulation  Rides  are  the  focal  points  of  this  complex. The Park is open from 12.00 noon to 8.00 pm.

Sarkhej Roza : One of the most resplendent mosques of India located in the city. Built with yellow sandstones, the architecture of this mosque is a blend of Hindu and Muslim styling.

To be part of the most amazing JIC event till date, you should register by taking advantage of our early bird discounts. We assure you that this JIC will change the way you have seen conferences forever!